Every month I have to work with GMs for both PFS Smackdown and the Absalom Lodge Conclave to plan sessions for the events. As most of you know, I also run a lot of games on the PFS Online server as well. One of the biggest problems I have is selecting which games to run for the events and online. Lately I’ve been using PFS Tracker to do this as well as to give myself a fast way to determine what I’ve played and GMed.

As you can see in the first image, I’ve taken a screen shot of what I’ve played and ran for PFS. This differs from the way Paizo keeps track in that it does not track multiple instances of scenarios played or ran, but it is by far a quicker way to find out if you’ve played or ran a particular scenario, module, AP, or quest for both PFS and SFS. It was created and is maintained by a PFS player over in the Netherlands. It even includes Playtest stuff.

As a GM it is very helpful to have a way to look at what content has already been played by what players. As you can see in this screen shot, I’ve made a group for PFS Smackdown players, input the numbers of those who have created an account on PFS Tracker (which is completely free by the way), and started looking at scenarios in Season 9. 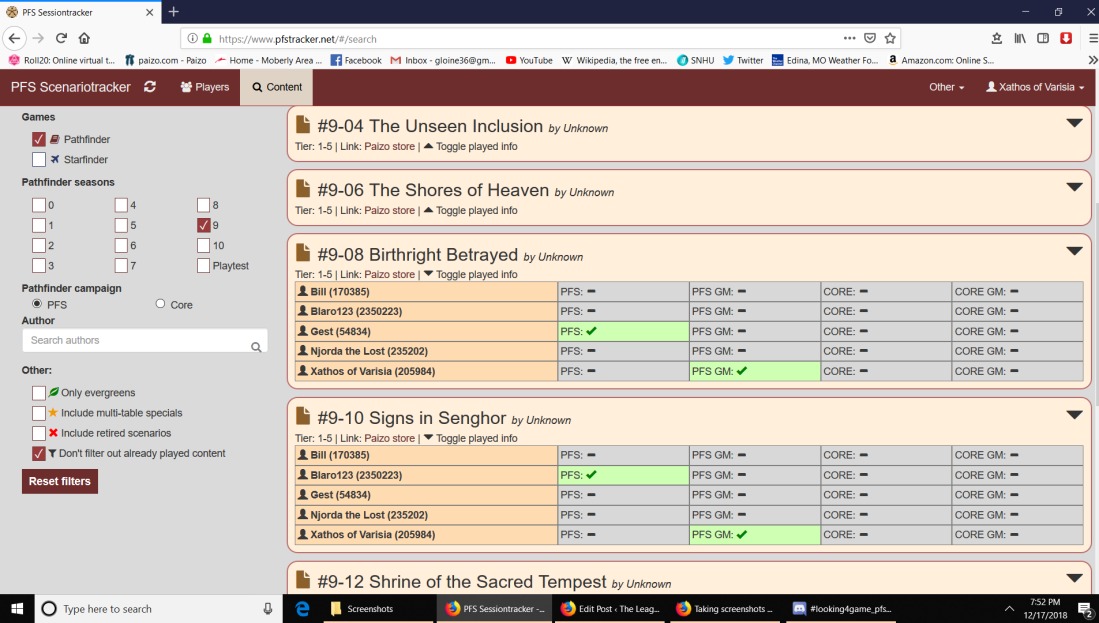 In this case, the group is PFS Lodge of Mid-Missouri. I refined the search for Tier 1-5 scenarios in Season 9. I then clicked on the spot in two of the scenarios “Toggle Played Info.” That brought up a list of those who have player or ran it. Note that it includes Core which we have not played or ran at PFS Smackdowns. When I look at Birthright Betrayed, I can quickly see that one of the players who is in the group and has filled out the scenarios he or she has played has already played the scenario. On my end, all I have to do is input the player’s PFS number into the group and add them. Groups can hold a maximum of 20 people which is not a problem because I can just make multiple groups.

When I go to plan the next Smackdown I can see who has played what with the PFS Tracker and select scenarios so that players will be able to play in a scenario. In this case, I could select one that Gest has played and one that he or she has not played and put them in the same time slot. That way that player will have the opportunity to play a session. While right now as our group is still expanding and most players have only played a dozen or so scenarios, it’s not too difficult to do the planning, but over time it will become harder to pick scenarios that players have not played unless I use a tool like this to help me.

This will become a major deal as Pathfinder Playtest comes to and end and Pathfinder Second Edition comes out in August. We are going to be offering Pathfinder 1st Edition content for several years easily. The best way to find out who has played what is by using this tool.

So if you would please register an account with PFS Tracker, and then fill out what you have and haven’t played and ran, I would certainly appreciate it. You can drop me an e-mail at gloine36@gmail.com to let me know you have done so (please include your PFS number and what lodge you are in; PFS Smackdown in Columbia, Absalom Lodge in Quincy, or both!) and I will add you to the group or groups.  I’ve got a big group for PFS Online and that’s what I’m using to pick the scenario I’m going to run tomorrow evening. Teaching history and rolling the d20 fill my time here in Northeast Missouri. That's a good thing since there is really nothing else going on here in this remote outpost of civilization. I've been rolling the d20 since 1979 and am now helping to grow a larger roleplaying community here in the area as a Venture-Captain for the Pathfinder Society. View all posts by Xathos